Now in its 33rd year, the publication adorns the shelves of many lawyers offices and provides pier based rankings on individual solicitors and firms as well as barristers and barristers chambers.

For many years Burton Copeland have achieved the top tier status in the North West of England in the criminal law category and are pleased that we have maintained that position in the 2020 edition.

The publication credits the firm in both the criminal sections for general and fraud defence work. The tier one status is general crime mean that Burton Copeland are one of only seven firms in the North West to achieve the highest accolade.

For many years Burton Copeland have achieved the top tier status in the North West of England in the criminal law category and are pleased that we have maintained that position in the 2020 edition.

The publication credits the firm in both the criminal sections for general and fraud defence work. The tier one status is general crime mean that Burton Copeland are one of only seven firms in the North West to achieve the highest accolade. 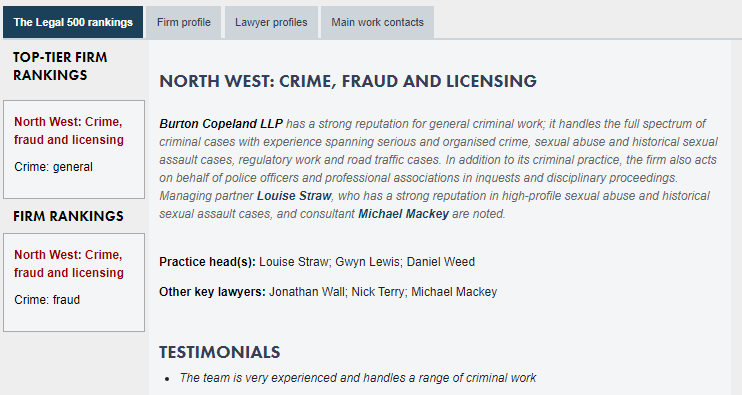 The publication quotes the firms as having “a strong reputation for general criminal work; it handles the full spectrum of criminal cases with experience spanning serious and organised crime, sexual abuse and historical sexual assault cases, regulatory work and road traffic cases. In addition to its criminal practice, the firm also acts on behalf of police officers and professional associations in inquests and disciplinary proceedings”.

Partner Erin Cowley is also celebrated in the fraud category for her work in representing companies and individuals in complex fraud, money laundering, BIS and Trading Standards and Proceeds of Crime Act cases as well as receivership and restraint orders. Michael Mackey is also noted for his experience in fraud and white collar crime and is rated as ‘excellent’. The strength of the fraud department “lies in its attention to detail and the level of care it gives to clients in all their cases”.

Described in last year’s edition as “the best of the best” Managing Partner Louise Straw has one again maintained her status as one of the top 20 “Leading Individuals” in the North West, as has former Managing Partner Mike Mackey who remains working for the firm as a consultant. Louise said, “whilst it is a privilege to be recognised for the work that I do, it is also right that I recognise the hard work and dedication of all of the staff at the Burton Copeland, without whom we would not have achieved tier one status”.

Other lawyers have also been recognised, Practice Head and Senior Partner Gwyn Lewis who heads the motoring and private crime department and other ‘Key Lawyers’ including Partner Nick Terry who works alongside Gwyn in the motoring law department, as well as maintaining a busy practice in regulatory law, representing professionals accused of criminal offences or facing misconduct proceedings. The publication has previously quoted Nick as having a dedication which is ‘unsurpassed’.

Jonathan Wall also maintains his status as a ‘Key Individual’ in the firm which was first established in the 2016 edition as the first non-solicitor for the firm for his work in cases of historical sexual abuse and sexual offences. Following his work on the Hillsborough inquest he was recognised as Paralegal of the Year at the Manchester Legal Awards and more recently acting on behalf of the Fire Officers Association in relation to the public inquiry into the Grenfell Tower fire he was made the first non-solicitor to be made partner of the firm in it’s thirty odd year history.

Compliance Partner Daniel Weed said, “I am extremely proud that Burton Copeland have achieved recognition as a leading firm in advising people when they are potentially at their most vulnerable. This recognition is a result of a great team effort as well as strong leadership from Louise [Straw] who leads by example. It is therefore fitting that she is once again acknowledged as one of the few elite leading lawyers.”