It is reported by the BBC that the Singer and former X Factor judge Tulisa Contostavlos was disqualified from driving for 15 months after pleading guilty to driving with excess alcohol.

It is understood that her Ferrari collided with a Saab carrying two persons after she had driven on the wrong side of the road near to Southgate tube station in London just before midnight in September last year.

The 27-year-old admitted driving over the limit with 54 micrograms of alcohol per 100ml of breath. A charge of dangerous driving was dropped by prosecutors. The former N-Dubz singer was also ordered to pay a £1,000 fine, £85 costs and a victim surcharge of £100.

Her lawyer Kirsty Brimlow Q.C. argued for leniency as she has signed with a Hollywood agent and intended to take up role acting in the US.

As ever when a celebrity appears in court there were mixed reports on social media and comments on press articles, but some say that she may have been treated differently and more leniently because she was a celebrity.

What do we think, well as lawyers representing celebrities for over 30 years in our experience, if anything, as the person is in the media spotlight, the case is likely to attract press and television interest, then the opposite is usually the case. My own view is that Judges and Magistrates would be more comfortable is being criticised for getting a sentence too low rather than too high.

But lets work it our from the Sentencing Council Guidelines, which all courts have to follow in sentencing defendants.

As you will see from the extract below with her reading of 54 mg in breath, she falls into the lower category of disqualification of between 12-16 months. Whilst she entered a guilty plea which results in a discount of a third, the minimum disqualification is 12 months. We can also see that there is at least one aggravating feature meaning that the offence was more serious, namely that she was “Involved in an accident”. The fine is set at band C which is a starting point of 150% of the weekly income adjusted to take into account of discount for guilty plea and aggravating features.

What has not been reported is the details provided to the court of her income or any sentencing remarks by the magistrates as to how the fine was calculated. The prosecution costs and victim surcharges are set amounts, so no issue there. 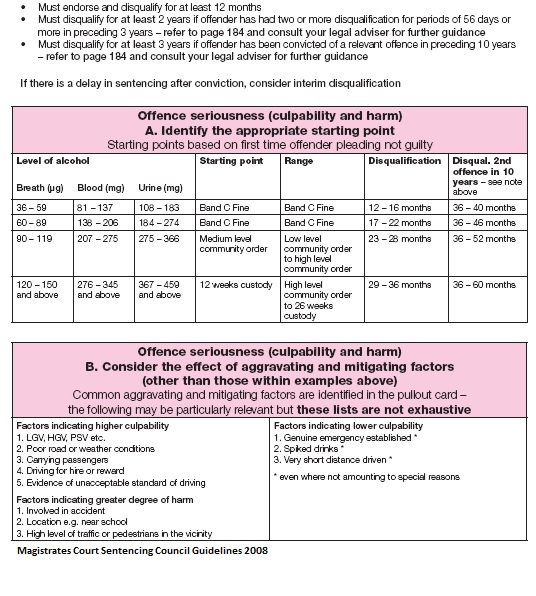 What is more interesting in our view if the fact that Tulisa’s address was given in open Court. The Daily Mirror reported that her lawyer argued “There is a real risk if her address is reported that could cause people to go to the address who she’d not wish to have there.” However, following argument on behalf of the press the District Judge Gill Allison dismissed the application and it is reported that Tulisa broke down in tears. It was said that when her address had previously been given in Court it had resulted in her having to move home.

I was extremely surprised by the argument and decision and speaking with a colleague this morning, Gwyn Lewis, (dubbed by the press as Merlin The Magician) this morning, he shares my astonishment. Having represented many celebrities he cannot remember ever losing an argument not to have an address disclosed. The argument he often uses for premiership footballers is that it would compromise the security of their home and families as burglars clearly know when they are playing, often when they are training or away on holiday etc.

So in answer to the original question did she get off lightly? Well if you take into account the compromise of her security, and anxiety and stress of that and having to move home as well as the the costs in lawyers, estate agents fee sand stamp duty etc. I think the true costs are immense!