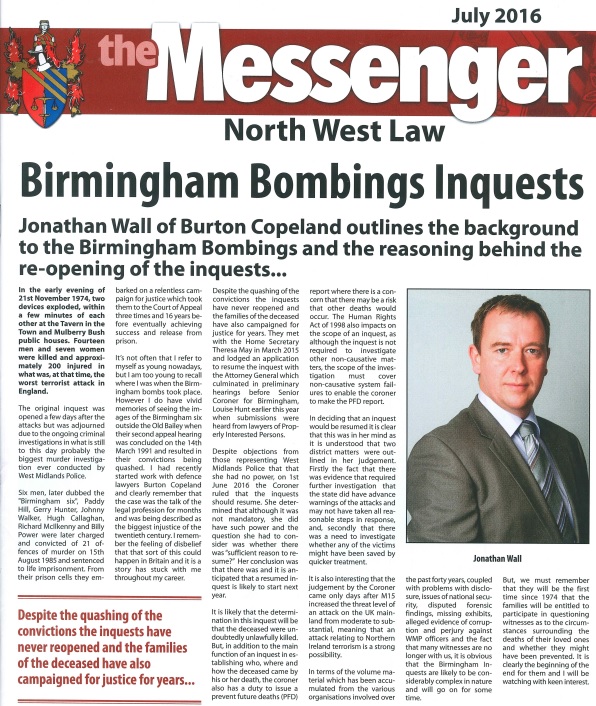 Having spent 2 1/2 years representing several interested parties in the inquest into the Hillsborough stadium disaster he has a keen interest in inquests and also miscarriages of justice and in fact started at Burton Copeland not long after the Birmingham Six were released following the quashing of their convictions. Jonathan said:

“In the early evening of 21st November 1974, two devices exploded, within a few minutes of each other at the Tavern in the Town and Mulberry Bush public houses. Fourteen men and seven women were killed and approximately 200 injured in what was, at that time, the worst terrorist attack in England. The original inquest was opened a few days after the attacks but was adjourned due to the ongoing criminal investigations in what is still to this day probably the biggest murder investigation ever conducted by West Midlands Police.

Six men, later dubbed the “Birmingham six”, Paddy Hill, Gerry Hunter, Johnny Walker, Hugh Callaghan, Richard Mcllkenny and Billy Power were later charged and convicted of 21 offences of murder on 15th August 1985 and sentenced to life imprisonment. From their prison cells they embarked on a relentless campaign for justice which took them to the Court of Appeal three times and 16 years before eventually achieving success and release from prison.

It’s not often that I refer to myself as young nowadays, but I am too young to recall where I was when the Birmingham bombs took place. However I do have vivid memories of seeing the images of the Birmingham six outside the Old Bailey when their second appeal hearing was concluded on the 14th March 1991 and resulted in their convictions being quashed. I had recently started work with defence lawyers Burton Copeland and clearly remember that the case was the talk of the legal profession for months and was being described as the biggest injustice of the twentieth century. I remember the feeling of disbelief that that sort of this could happen in Britain and it is a story has stuck with me throughout my career.

Despite the quashing of the convictions the inquests have never reopened and the families of the deceased have also campaigned for justice for years. They met with the Home Secretary Theresa May in March 2015 and lodged an application to resume the inquest with the Attorney General which culminated in preliminary hearings before Senior Coroner for Birmingham, Louise Hunt earlier this year when submissions were heard from lawyers of Properly Interested Persons.

Despite objections from those representing West Midlands Police that that she had no power, on 1st June 2016 the Coroner

ruled that the inquests should resume. She determined that although it was not mandatory, she did have such power and the question she had to consider was whether there was “sufficient reason to resume?” Her conclusion was that there was and it is anticipated that a resumed inquest is likely to start next year

It is likely that the determination in this inquest will be that the deceased were undoubtedly unlawfully killed. But, in addition to the main function of an inquest in establishing who, where and how the deceased came by his or her death, the coroner also has a duty to issue a prevent future deaths (PFD) report where there is a concern that there may be a risk that other deaths would occur. The Human Rights Act of 1998 also impacts on the scope of an inquest, as although the inquest is not required to investigate other non-causative matters, the scope of the investigation must cover non-causative system failures to enable the coroner to make the PFD report.

In deciding that an inquest would be resumed it is clear that this was in her mind as it is understood that two district matters were out lined in her judgement. Firstly the fact that there was evidence that required further investigation that the state did have advance warnings of the attacks and may not have taken all reasonable steps in response, and, secondly that there was a need to investigate whether any of the victims might have been saved by quicker treatment.

It is also interesting that the judgement by the Coroner came only days after M15 increased the threat level of an attack on the UK mainland from moderate to substantial, meaning that an attack relating to Northern Ireland terrorism is a strong possibility.

In terms of the volume of material which has been accumulated from the various organisations involved over the past forty years, coupled with problems with disclosure, issues of national security, disputed forensic findings, missing exhibits, alleged evidence of corruption and perjury against WMP officers and the fact that many witnesses are no longer with us, it is obvious that the Birmingham Inquests are likely to be considerably complex in nature and will go on for some time.

But, we must remember that they will be the first time since 1974 that the families will be entitled to participate in questioning witnesses as to the circumstances surrounding the deaths of their loved ones and whether they might have been prevented. It is clearly the beginning of the end for them and I will be watching with keen interest.”

Drink Drive Limit Could be Reduced by 60%

The Goverment are currently considering a bill to change the law to reduce the current drink driving limit from 35 mg to just 14 mg. Meaning than a motorist might find themselves over the limit for having just half a pint of beer. In this article expert Road Traffic Lawyer Nick Terry discusses the various issues including how the reduction in Scotland in 2012 saw no decrease in alcohol related incidents and what the government ought to consider before making such drastic changes.

Doctors of all disciplines, whether that’s primary care, secondary care, private healthcare or anything in between must adhere to the guidelines, principles and procedures set out in Good Medical Practice, Fitness to Practise Rules and the Medical Act 1983 (as amended). All doctors, upon completion of training must be registered with, and hold a licence…

Burton Copeland has once again been included in The Times Best Lawyers list for 2022. We’re delighted and proud to have been included in this list and to be ranked alongside other prestigious law firms is truly humbling. You can find out what the award means to us in this article.