OUR FORMER SENIOR PARTNER MIKE MACKEY IS FEATURED IN THE LAW SOCIETY MESSENGER GIVING HIS VIEWS ON THE RECENT DEBATE RELATING TO MP PETER HAIN USING PARLIAMENTARY PRIVILEGE TO NAME SIR PHILLIP GREEN FOLLOWING THE COURT OF APPEAL ISSUING AN INJUNCTION PREVENTING THE TELEGRAPH NEWSPAPER REPORTING ON THE ISSUE. 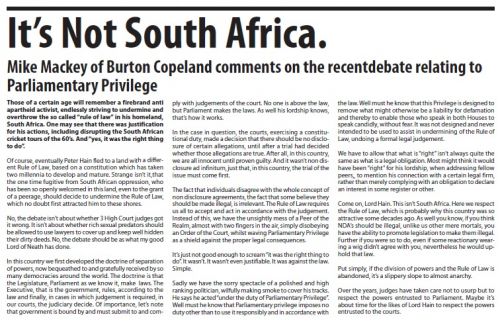 The full article is repeated below, or you can see the full online December edition here.

Those of a certain age will remember a firebrand anti apartheid activist, endlessly striving to undermine and overthrow the so called “rule of law” in his homeland, South Africa. One may see that there was justification for his actions, including disrupting the South African cricket tours of the 60’s. And “yes, it was the right thing to do”.

Of course, eventually Peter Hain fled to a land with a different Rule of Law, based on a constitution which has taken two millennia to develop and mature. Strange isn’t it,that the one time fugitive from South African oppression, who has been so openly welcomed in this land, even to the grant of a peerage, should decide to undermine the Rule of Law, which no doubt first attracted him to these shores.

In this country we first developed the doctrine of separation of powers, now bequeathed to and gratefully received by so many democracies around the world. The doctrine is that the Legislature, Parliament as we know it, make laws. The Executive, that is the government, rules, according to the law and finally, in cases in which judgement is required, in our courts, the judiciary decide. Of importance, let’s note that government is bound by and must submit to and comply with judgements of the court. No one is above the law, but Parliament makes the laws. As well his lordship knows, that’s how it works.

In the case in question, the courts, exercising a constitutional duty, made a decision that there should be no disclosure of certain allegations, until after a trial had decided whether those allegations are true. After all, in this country, we are all innocent until proven guilty. And it wasn’t non dis-closure ad-infinitum, just that, in this country, the trial of the issue must come first.

The fact that individuals disagree with the whole concept of non disclosure agreements, the fact that some believe they should be made illegal, is irrelevant. The Rule of Law requires us all to accept and act in accordance with the judgement. Instead of this, we have the unsightly mess of a Peer of the Realm, almost with two fingers in the air, simply disobeying an Order of the Court, whilst waving Parliamentary Privilege as a shield against the proper legal consequences.

It’s just not good enough to scream “it was the right thing to do”. It wasn’t. It wasn’t even justifiable. It was against the law. Simple.

Sadly we have the sorry spectacle of a polished and high ranking politician, wilfully making smoke to cover his tracks. He says he acted “under the duty of Parliamentary Privilege”. Well must he know that Parliamentary privilege imposes no duty other than to use it responsibly and in accordance with the law. Well must he know that this Privilege is designed to remove what might otherwise be a liability for defamation and thereby to enable those who speak in both Houses to speak candidly, without fear. It was not designed and never intended to be used to assist in undermining of the Rule of Law, undoing a formal legal judgement.

We have to allow that what is “right” isn’t always quite the same as what is a legal obligation. Most might think it would have been “right” for his lordship, when addressing fellow peers,, to mention his connection with a certain legal firm, rather than merely complying with an obligation to declare an interest in some register or other.

Come on, Lord Hain. This isn’t South Africa. Here we respect the Rule of Law, which is probably why this country was so attractive some decades ago. As well you know, if you think NDA’s should be illegal, unlike us other mere mortals, you have the ability to promote legislation to make them illegal. Further if you were so to do, even if some reactionary wear-ing a wig didn’t agree with you, nevertheless he would up-hold that law.

Put simply, if the division of powers and the Rule of Law is abandoned, it’s a slippery slope to almost anarchy.

Mike Mackey is the former Senior and Managing partner at Burton Copeland and now remains a consultant of the firm. To read more about Mike and the work that he does, you can read his full profile is here.