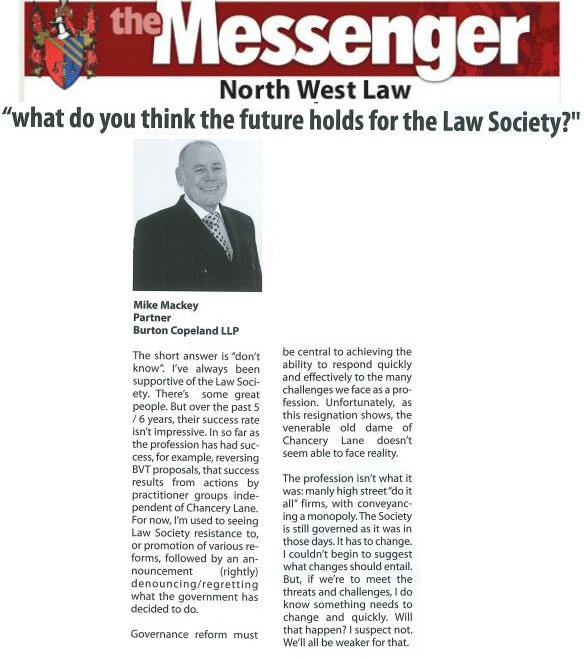 Our Mike Mackey appears as a “Talking Head” in this months edition of the Law Society Messenger publication with a controversial opinion on the future of the Law Society. He agrees with Catherine Dixon, “change is needed” he says, Will it happen, probably not.

Asked about the future of the Law Society, Mike’s response was typically short and candid, “I don’t know”. But he then provided his opinion on why the society should change, but doesn’t think that it will soon.

“I’ve always been supportive of the Law Society. There’s some great people. But over the past 5 / 6 years, their success rate isn’t impressive. In so far as the profession has had success, for example reversing BVT proposals, that success results from actions by practitioner groups independence of Chancery Lane. For now i’m used to seeing Law Society resistance to , or promotion of various reforms, followed by an announcement (rightly) denouncing / regretting what the government has decided to do.

Governance reform must be central to achieving the ability to respond quickly and effectively to the many challenges we face as a profession. Unfortunately, as this resignation shows, the vulnerable old dame of Chancery Lane doesn’t seem able to face reality.

The profession isn’t what it was: manly high street “do it all” firms, with conveyancing a monopoly. The Society is still governed as it was in those days. It has to change. I couldn’t begin to suggest what changes should entail. But, if we’re to meet the threats and challenges, I do know something needs to change and quickly. Will that happen? I suspect not. We’ll all be weaker for that”