Damian qualified as a solicitor in late 2015 and becomes the latest to achieve partnership status within the firm.

Whilst his route from qualification, to achieving Duty Solicitor status (along side his colleague Anthony Smith only last month), to now achieving partnership has been a quick one, Damian is has been regarded by Senior Partners as “part of the furniture” and in fact started his career at Burton Copeland before the three current Designated Members Gwyn Lewis, Louise Straw and Dan Weed. 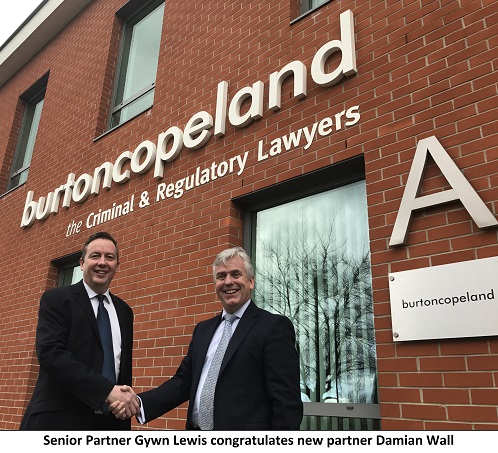 When asked about his career, his accolade and the future, Damian responded:

“World records? world champions? X factor?, scorer of the greatest ever goal, in a Manchester Derby I should add.”

“The answer is 1985, the year they were born, which is also when I started work at Burton Copeland and it is with enormous pride that 32 years later I have been made partner at the firm I started working at age 17 …… I guess you can work my age out now”.

When asked about past changes and the future Damian commented:

“I have spent a bit of time away from the mighty BC, but man and boy I have spent over 25 years here. The firm has changed as drastically and as radically as the world and the legal landscape, and hallelujah for that. Smoking in the office, bad hair, no mobile phones and PACE which was so new nobody had a clue what to do with it. Ironically when I finally got round to qualifying as a solicitor, one of my pieces of coursework was on ‘the right to silence’. Despite the efforts to diminish the role of the defence solicitor, it is clear to me every day that the profession is vital to maintain, uphold and evolutionise fundamental social principals of justice, fairness and mercy”

“I am so grateful to Gwyn, Louise and Dan for this privilege, and I also want to thank Mike Mackey who has been another tremendous support throughout my career. I might have been a little late in getting here, but I feel invigorated and encouraged about the future.”

“Unlike sportsmen and women we lawyers tend to improve our skill and ability with age and experience, especially when in such a challenging and dynamic environment as there is at Burton Copeland”